skip to main | skip to sidebar

So many people are obsessed with their lives.

But they're gone. I sometimes think about my life, but I know it does me no good. There's no point dwelling on what was. I must focus on what is.

My partner, Mercutio, is one of them, but despite his obsession with Arrabella, he still performs his duties exceptionally well. Most of the Guardians do.

I constantly see dead soldiers, warriors, conquerors, and I wonder why I was chosen and they were not.

Perhaps it is our ability to focus, our resolute determination not to give up. Perhaps that is why I am a Guardian and others who are more skilled in the arts of war are not.
Posted by Thaddeus at 2:39 AM 3 comments:

During life, I once had a rather cynical thought: that every event, if followed long enough, ultimately ends in either sadness, disappointment, or despair.

This place seems to thrive on that philosophy.
Posted by Thaddeus at 6:16 AM 1 comment:

I'm not sure when I lost my sense of humor, but it was during my lifetime, long before I arrived here. I think it was shortly after I went to Chicago and saw the slaughter houses. Even though I've no sense of smell in this place, I can still recall the reek of death and decay. Just looking around here constantly reminds me of that smell.
Posted by Thaddeus at 4:25 PM No comments: 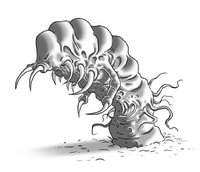 What is life if this is the afterlife? Why go through the struggles of that existence only to end up here? This defies most known religious doctrines that I have encountered.

Of course, I'm encountering new doctrines daily. In the wake of disillusionment, new myths are formed; new religions created from the ashes of the old. Perhaps the worst of these is that of the Pain People.

While this certainly mimics the first Noble Truth of Buddhism, unlike Buddhism there is no Eightfold Path to Nirvana.

Their conversion tool is the paranid, or pain worm. Once the worm attaches itself, it creates a feeling of intense agony. I've found no way to detach the worm without obliterating its host at the same time.

Of course, I've noticed the pain worms are forced upon most of their "worshippers." I guess it doesn't matter to them. Why should it? Did it matter to the Inquisition?
Posted by Thaddeus at 10:23 PM No comments:

I overheard a legless boy talking to a priest. The boy said, "My father told me I would be reunited with my leg when I reached heaven. Where's my leg? Have you seen it?"

The priest looked down at the boy with pity and sighed, "You poor dumb bastard. Does this look like heaven to you?"
Posted by Thaddeus at 3:34 AM No comments:

When I came in today, I found someone reading my journal. For a moment, it disturbed me. I know I have no expectation of privacy. That is impossible here. But sometimes I forget.

Fortunately, I have no secrets. Only questions. Questions to which I may never know the answers to. Such as why do the demons throw people into the void? Why do they suck the life out of them? Why do they burrow? Amongst hundreds of millions of dead, why was I chosen?Mercutio doesn't concern himself with such matters. He has a job to do and he gets it done. That's what I like about him.

Posted by Thaddeus at 3:39 PM No comments:

If there is a god, I hope I can someday meet him, her, or it so I can ask what the point of this horrible existence is.

Posted by Thaddeus at 2:41 AM No comments:

Thaddeus
All writings, images and content in this blog are copyright 2005-6, Stormcrow Hayes, Rob Steen, TOKYOPOP.